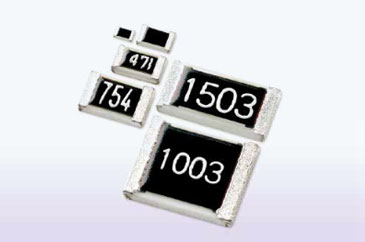 Profusion is pleased to introduce Susumu, a specialist in thin film technology. The Japanese manufacturer’s RR and RS series of thin film resistors are ideally suited to high quality audio, and for such applications as hi-fi and pro audio gear.

When compared alongside other types of resistors, we feel that thin film is the way to go for audio designs. Don’t believe us? Then allow us to present you with a brief overview of the various types of resistors, and explain why you may want to consider using Susumu’s premium precision resistors in your next audio build.

Summary of resistor types for audio

There are several types of resistor to consider for audio designs. Carbon resistors are generally not suited to audio applications, due to their high levels of noise and distortion. Wirewound (or winding wire) resistors are usually built for power applications, and are inductive and/or expensive.

The most popular choice for audio applications are metal film resistors, as they offer low levels of noise and distortion, and are more reliable than carbon. The two most common types of these are thick metal film (commonly referred to as metal film, thick film or MELF) and thin metal film (referred to as thin film). Metal foil, metal plate and metal oxide are alternatives for other applications.

Thick film resistors are the most prevalent, accounting for over 80% of resistors produced. Thin film, despite their superior performance and reliability, constitute less than 5% of the market, as they are more expensive to manufacture.

Below, however, we’ll compare thick film and thin film resistors, and make a case for why you might want to spend a little extra on audio designs where fidelity and low noise are crucial factors.

Thin film resistors deliver a lower level of noise due to their more homogeneous structure – whereas thick film resistors are paste printed, Susumu utilises a sputtering process, allowing the resistive material to be 1000 times thinner than thick film, and a more uniform composition throughout (fig. 1). 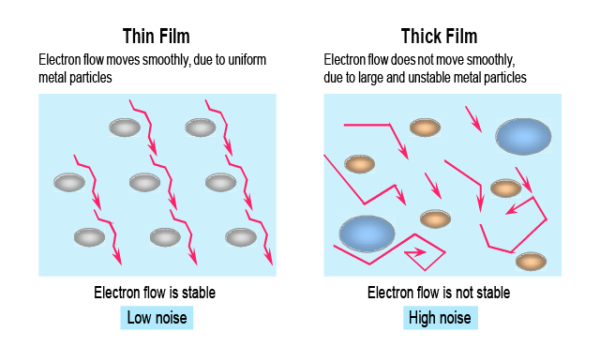 All resistors will change slightly over time, depending on the type. Metal film resistors are expected to see a change of around 50 to 75ppm (parts per million) per year, and if placed in precise applications will need to be “burned-in” – a process that takes at least a week and may see further shifts of up to 200ppm. If deprived of a burn-in period, the application may require a whopping 4-5000 hours in operation to fully stabilise.

If you are undecided on whether to use thin film or thick film, please consider that thick film resistors are considerably noisier with higher distortion, as elaborated upon in the ESS Application Note ‘Maximizing DAC Performance for Every Budget’1:

As demonstrated in fig. 2, the high purity of thin film results in far more consistent audio with lower noise. 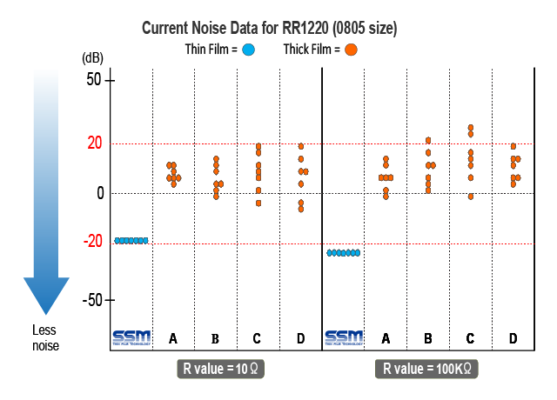 Every resistor is a thermal noise source where the noise level is defined by the equation:
Where KB is Boltzmann’s constant, T is Absolute temperature and R is the resistance value.

In addition, every resistor generates excess noise (shot noise or current noise) when a voltage is applied and current starts to flow. This excess noise is specified as a ratio of the fundamental thermal noise and for some metal film resistors can be well over +20dB (>1000%) additional noise (fig2).

Susumu’s thin film resistors are premium components with the best possible performance, stability and resistance. The manufacturer is also understandably proud of the extremely low expected failure rate on its key lines.

While the RR models are considered all-purpose, at 20dB they suffer 10% more noise than fundamental, making them best suited for all but the lowest noise applications.

Susumu’s newly released RS Series of thin film precision resistors have been developed specifically for audio applications, as they offer even lower noise than the RG series, which is aimed at precision applications such as test and measurement.

The RS series, which adds only 1% more noise than fundamental (fig. 5), is better suited to pro audio and very low noise applications than the RR or RS series. 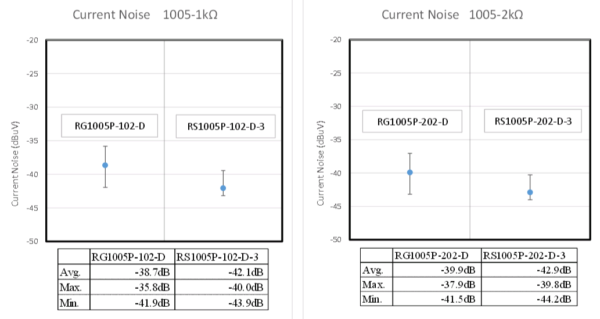 You can currently browse a selection of Susumu’s RR, RS and RG Series resistors on the Profusionplc.com Susumu page. Also, please be aware that Susumu have even higher precision resistors – mainly used for scientific and measuring instruments. Please contact us directly to enquire further about these product lines. 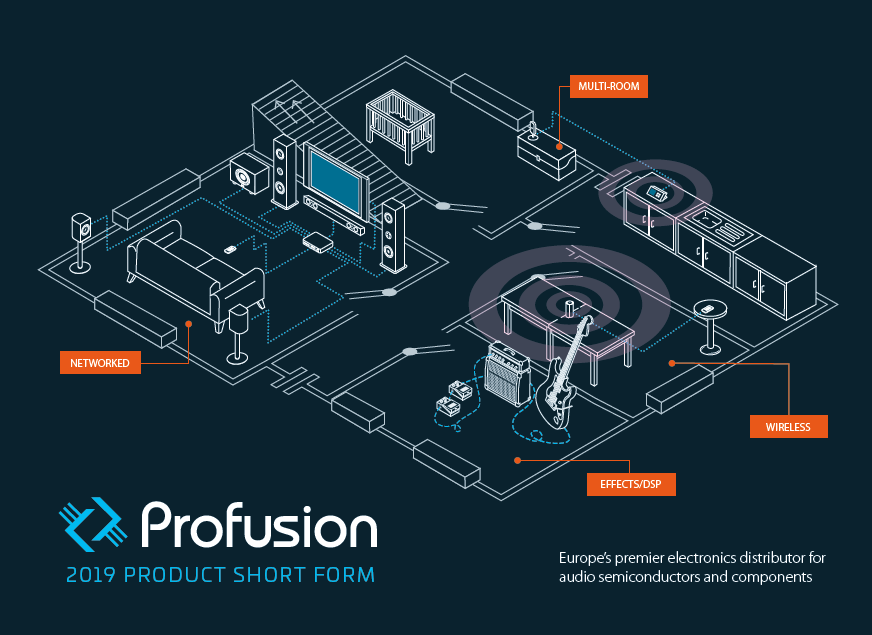